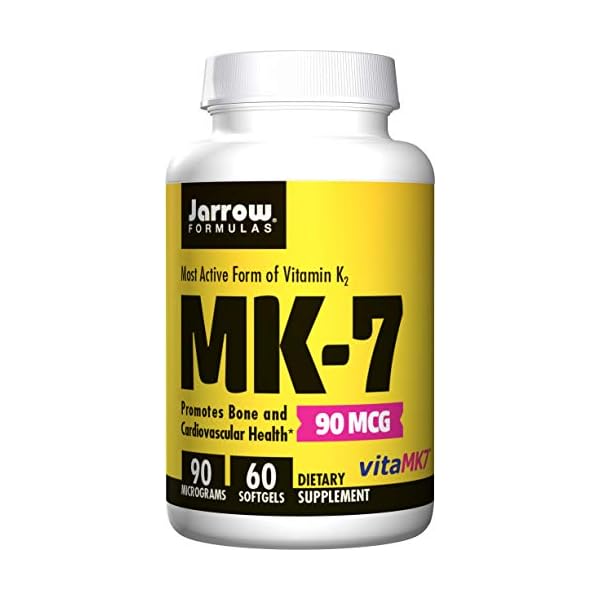 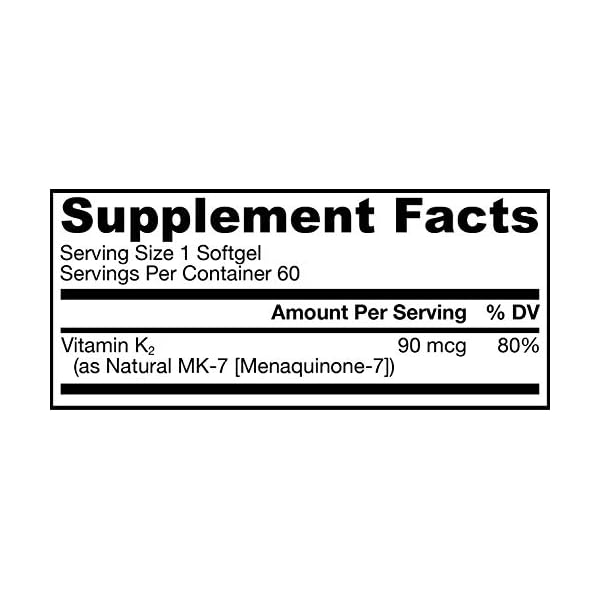 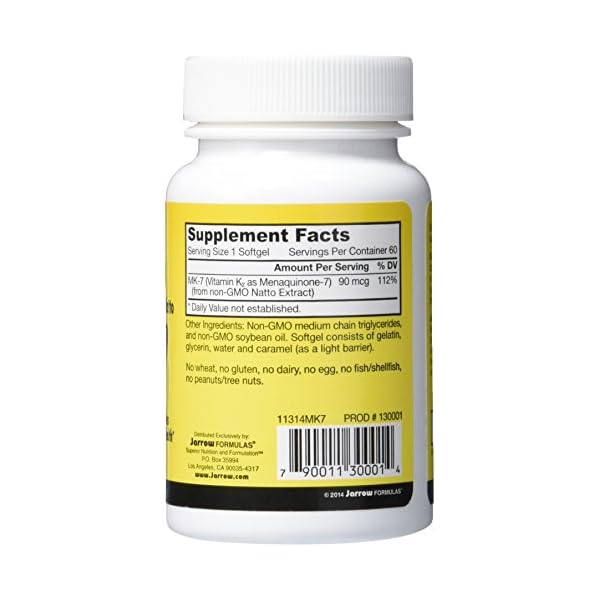 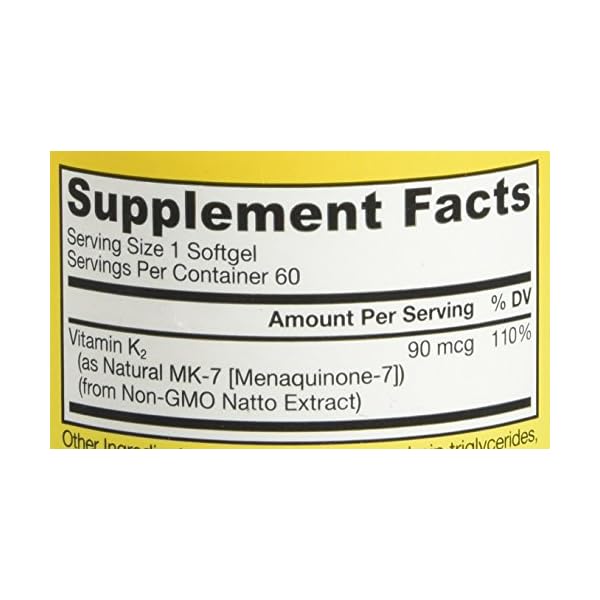 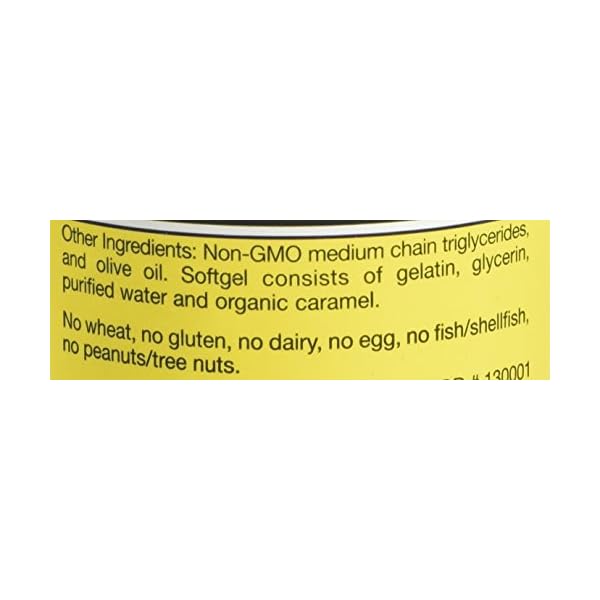 Product prices and availability are accurate as of the date/time indicated and are subject to change. Any price and availability information displayed on [relevant Amazon Site(s), as applicable] at the time of purchase will apply to the purchase of this product.

NOTE: If you have a medical condition, are pregnant, lactating, trying to conceive, under the age of 18, or taking medications (especially anticoagulants [e.g. warfarin/Coumadin]), consult your healthcare professional before using this product. 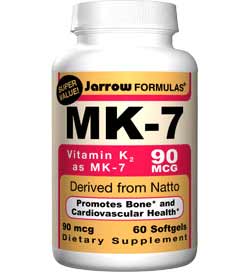 The story of vitamin K began in 1929 when the Danish researcher Henrik Dam discovered its role in coagulation. Vitamin K is integral to the conversion of the amino acid glutamic acid (Glu) into gamma-carboxyglutamate (Gla). Proteins containing Gla are important in coagulation processes. These proteins work together in a complex cascade to create fibrin that strengthens platelets and helps to stop the flow of blood when necessary. Almost fifty years later, vitamin K benefits beyond coagulation were discovered.*

Vitamin K is a group name for a number of structurally related compounds including phylloquinone (vitamin K1) and menaquinones (K2 vitamins). The synthetic, short-chain vitamin K1 is commonly used in food supplements, but recently the natural, long-chain menaquinone-7 (MK-7) has also become available as a dietary supplement. All forms of vitamin K serve as a cofactor for the posttranslational carboxylation of certain protein bound glutamate residues, which are converted into gamma-carboxyglutamate (Gla). These Gla residues form calcium-binding sites that are essential for the activity of the proteins in which they are found. The most recognized Gla-containing proteins are the blood coagulation factors II, VII, IX, and X, which are all synthesized in the liver. Gla proteins not related to blood clotting are osteocalcin (synthesized in bone) and matrix Gla protein (mainly synthesized in cartilage and in the vessel wall).

Osteocalcin is the most abundant vitamin K-dependent protein in bone. It is synthesized by the bone forming cells known as osteoblasts and plays an important role in the regular deposition of hydroxyapatite in the bones. The amount of osteocalcin that is not carboxylated [under-carboxylated osteocalcin] is considered a sensitive measure of vitamin K status in bone, with an elevated percentage of under-carboxylated osteocalcin associated with low dietary intakes of vitamin K. As a result, bone health relies heavily on the activation of osteocalcin by vitamin K. Studies show that when supplemental vitamin K is given to people with inactive osteocalcin, active levels will rise.*

Modern scientific evidence has linked low vitamin K intake with a number of suboptimal health conditions. In addition, vitamin K supplements have been shown to help maintain healthy bone density and display a beneficial effect on the elastic properties of the arterial vessel wall.*

The K2 vitamins include the menaquinones, MK-7, MK-8, and MK-9 and are present in some fermented foods, most notably natto. Natto is a traditional Japanese fermented soybean food, which is produced by growing the MK-7 generating Bacillus natto on the surface of cooked soybean. Natto also happens to be the richest dietary source of vitamin K presently known, almost all of which occurs in the form of MK-7. The longer-chain menaquinones, including MK-7, are more hydrophobic, have longer half-lives and are incorporated into low-density lipoproteins. Moreover, MK-7 from natto, or Bacillus natto fermentation, is much better absorbed than K1 from spinach. While vitamin K1 is primarily absorbed by the liver, MK-7 is absorbed in extra hepatic tissues, such as the arterial wall, pancreas, and testes.*

A recent study compared the in vivo properties of two forms of vitamin K: MK-7 and K1. Researchers demonstrated that after oral ingestion, MK-7 is more effective in catalyzing osteocalcin carboxylation in bone.* They also noted that K1 declined to its baseline level within several hours, whereas MK-7 remained detectable for at least 4 days. The longer half-life means MK-7 is available to support bone and arterial integrity for much longer periods than other forms of vitamin K.*

During the last ten years, several studies have looked at the relationship between food intake and bone health. Evidence of stronger bones in people eating natto adds weight to the theory that people generally have insufficient serum levels of vitamin K2 for optimum bone and arterial health. Furthermore, a long-term population-based study, carried out in the Netherlands between 1990 and 2000, demonstrated that dietary intake of vitamin K2, but not vitamin K1, promoted optimum cardiovascular health.*

Do NOT use if taking anticoagulant drugs (such as Warfarin) or other medications.

What’s in the Box

Other Products from Jarrow Formulas: 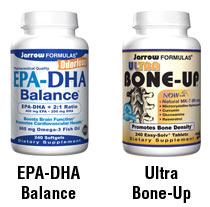 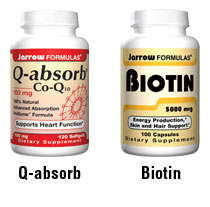 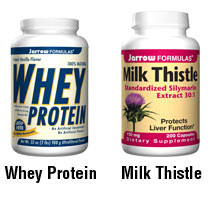 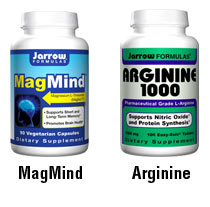 90 mcg Per Serving, Vitamin K2 as Menaquinone-7 Softgels
Superior form of vitamin K Longer half-life than K1 (days vs. hours)*
Promotes bone health* and higher activity than K1 (6X in vitro)*
10X better absorbed than K1 from spinach.
Critical to Blood Clotting & Coagulation* No wheat, no gluten, no dairy, no egg, no fish/shellfish, no peanuts/tree nuts.

Any cookies that may not be particularly necessary for the website to function and is used specifically to collect user personal data via analytics, ads, other embedded contents are termed as non-necessary cookies. It is mandatory to procure user consent prior to running these cookies on your website.